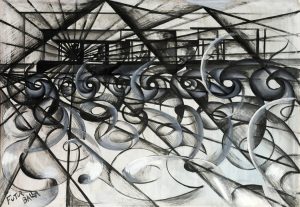 Once Cubism was introduced into the vocabulary of modern art, its effect was immediate as it influenced many dynamic experiments in abstract art. This week, you will read about artists associated with Italian Futurism, one of the movements that developed as a result of Cubism.

This artistic experimentation was cut short with the outbreak of World War I, which begins in 1914, embroiling Europe in a cataclysmic conflict where the advancements of the modern industrial age are immediately shown to have devastating consequences.

Because of the economic losses and loss of life resulting from the war, there was a revolution in Russia that overthrew the monarchy and ushered in Communism as a governmental system. Artists associated with this are called Russian Constructivists.

Italian Futurism develops at the same time as Analytic Cubism around 1907-1911, but with different goals. While Cubism was engaged with conceptual ideas about form and perception in the modern world and then translating these ideas into a formal visual vocabulary, Italian Futurism was politically and culturally engaged with modernizing Italy.

The Italian Futurists extolled the importance of masculinity and technology in an accelerated Cubist variation reliant on faceted forms, short jagged brushstrokes and diagonal lines to reflect the sensation of speed. Their founder, Filippo Tommaso Marinetti, who divided his early years between Paris and Milan, published frequent manifestoes in leading newspapers that attempted to pull his fellow Italians aggressively and forcefully into the modern era.

In the “Futurist Manifesto,” published on the front page of the French newspaper Le Figaro in 1909, Marinetti called for the demolition of museums and praised the beauty of industrial speed by describing a roaring car as more beautiful than the Victory of Samothrace, one of the most famous sculptures from ancient Greece on view in the Louvre Museum.

On Khan Academy, you will study most of the material in the section ‘Futurism and the Great War’.

Keep ongoing notes about major ideas, characteristics and goals of the Futurists and about how the various artworks express these goals and ideas visually.

At the bottom of this essay, click on two of the links to individual artworks in the additional resources section and read their short descriptions. These are:

For each artwork, write down a short explanation of how each of these artworks reflects a major goal or idea about Futurism in the artwork.

Read the next two essays and watch one video from the menu on the left side:

At the bottom of this essay, click on the link to this artwork at the Met (you should have already read the MoMA’s page about this artwork).

Suprematism is related to the work of one Russian artist named Kazimir Malevich, who was influenced by Cubism to develop what he called Suprematism.

Russian Constructivism developed immediately after World War I in Russia as the country underwent a complete revolution resulting in Communism replacing rule by a king or queen.

Each are based on different philosophies and political ideologies that were relevant at the beginning of the 20th Century and both styles took place in the Soviet Union.

Read overview about the artist Kazimir Malevich on artstory.org then click on ‘Kazimir Malevich Artworks in Focus’ section in the blue text box to read about the first 5 artworks through White on White painting. LINK: http://www.theartstory.org/artist-malevich-kasimir.htm

Read this comic (link below) and the short text that follows it, comparing the philosophies of Kazimir Malevich with Vladimir Tatlin, associated with the Russian Constructivists. LINK: 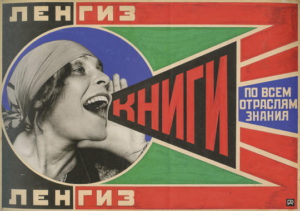 Aleksandr Rodchenko, Shout it all out: Books, Advertising Poster for the State Publishing House.

The events of World War I led to a complete economic and social collapse in Russia with the proletariat or working class leading a revolution in 1917. The monarchy is abolished and a new system of government, called Communism, is enacted for the first time in world history based on the theories of the economist Karl Marx. A group of Russian artists called the Constructivists responded by using art in service to the newly developing society of Communist Russia.

Read the essay about Russian Constructivism (when you get to ‘concepts and styles’ click on the downward arrow to reveal the rest of the essay – read all of it!): LINK: http://www.theartstory.org/movement-constructivism.htm

On Khan Academy, in the ‘Art Between the Wars’ section, read the essay about the Russian Constructivists and Varvara Stepanova’s The Results of the First Five-Year Plan, photomontage, made in 1932:

Answer this question in your notes in a few sentences (Question 1):

For Russian Constructivism, consider how this art was politically, culturally and socially engaged with ideas relevant to their country during this time. How did the Russian Constructivists characterize the role of an artist in their society? What was their overall goal and what were they hoping to use their art to do?

WRITING ASSIGNMENT for NEXT CLASS:

Review all of your notes for the central ideas and goals of the Futurists and the Constructivists and keep track of the best vocabulary words and terms that express the different ideas of each group.

Now, write a ‘job posting’ or ‘help wanted’ advertisement from the point of view of either the Italian Futurists or the Russian Constructivists calling for other people to join them. Think about what they valued and what they endorsed. Your ‘job posting’ advertisement should include the best possible choices of words and terms that communicate about the Futurists or the Constructivists and text and images that convey their ideas about what they would be looking for in other people who would join their group.

This is a chance to have a little fun. If you want to include images or hand-draw the ad, that is great. If you only want text, that’s fine. Think about how every word and every image should work together to express the ideas of the group in coherent visual and/or written form and feature the characteristics that were important to the Futurists or the Constructivists and that are seen in their artworks.

We will review these Job Postings or Help Wanted ads in our next class to discuss how and what makes each of them successful in terms of conveying the major goals and ideas associated with the Futurists to the reader. Bring yours to class for in-class peer review.

For class next week – summary of the 2 required things to do: