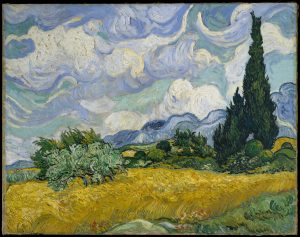 Rather than a style, la Belle Epoque designates a time period during the end of the 19th Century, throughout the 1890s and into the early twentieth-century. During this period, the ongoing developments and tremendous changes in modern society were reflected in the stylistic diversity and creativity in the visual arts. Post-Impressionism, Symbolism and Art Nouveau, a style for furniture and interior design, were three visual styles that were prominent during this time, referred to in the MoMA essay ‘What is Modern Art?’ as the Belle Epoque, meaning ‘beautiful era.’

This week, you will learn about:

Each of the five main Post-Impressionist artists you will read about this week had individual ideas and techniques that were unique to them. In general, we see that abstraction is becoming more common as artists are not attempting to replicate the outside world in an optical or a visually realistic way, like the Impressionists. Instead, these five artists were influenced by the avant-garde approach of the Impressionists to break from tradition, but were determined to incorporate their own ideas and subjective interests into their work using abstraction to visually convey and express their subjective or personal responses to modernity in different ways.

Reading and note-taking for Post-Impressionism: See the assigned readings and videos listed below from the Met Museum and Khan Academy websites. Take notes of major information as you learn about each artist, keeping artists separate. Write out clear bullet points or words and phrases explaining the following 3 things as best you can in your own words for each of the 5 artists individually. Bring these notes with you to have ready for use in class next week.:

Read and watch the following and add information for each of the above points of information into your notes for each artist: 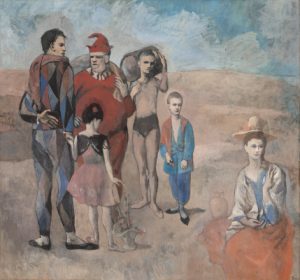 Symbolism is a broad category for different artists whose work uses signs and symbols to communicate information beyond the visual appearance of things. The Symbolist movement coincides with Art Nouveau and Post-Impressionism at the end of the nineteenth century.

Read my analysis (below) and look at the Picasso artwork above as an example of how what we see in an artwork – here, a group of circus performers – can be taken at face value for what it is, but also has symbolic information relevant to the artist that we can and should analyze and interpret for its added significance.

Pablo Picasso’s The Family of Saltimbanques:

Though his boldest contribution to modern art would come in 1907 with the development of Cubism, Pablo Picasso’s The Family of Saltimbanques, 1905, is a pivotal work that announces the arrival of the most influential visual artist of the twentieth century. This was the largest painting Picasso had attempted and he worked on it for 9 months in a deliberate effort to establish his identity as an artist in Paris, where he had moved in 1900 from his native Spain.

The melancholy painting depicts a troupe of itinerant circus performers in a barren landscape rather than inside a circus tent. Picasso regularly attended the Cirque Médrano in his Montmartre neighborhood, sometimes going three or four nights a week, and he especially enjoyed mixing with the performers in the local cafés afterward.[i] Picasso felt a deep kinship with these performers who lived in close-knit itinerant communities outside of established French society. He admired their commitment in devoting themselves fully to their art with their survival dependent on the sublimation of their life to their work.

With this painting, Picasso began his lifelong identification with the figure of the harlequin – the witty trickster character from the Italian commedia dell’arte theater, seen on the far left in his checkered costume and here, featuring a self-portrait of the young artist. The harlequin holds the hand of a young girl who symbolizes Picasso’s younger sister, Conchita, who died when she was 7 years old in 1895 before the artist moved to Paris to establish himself as an artist.

The figure of the clown next to him was based in part on Picasso’s friend, the poet and critic Guillaume Apollinaire, and also on Grock, a clown introduced by the Cirque Médrano in 1904. The artist’s personal identification with the circus performers confirms Picasso’s commitment to spend his life making art on his own determined path outside the mainstream. Like the performers, the artist’s situation was similarly precarious at the time, existing hand-to-mouth far from home with nothing but his talent and instinct as he sought to establish himself as an artist in Paris. In 1905, Picasso and other impoverished and unknown artists, writers and poets lived together in a dilapidated building known as the Bateau Lavoir. In spite of their meager circumstances, the group was rich with energy and camaraderie going out every night to the circus, cafés or dance-hall and working to express vital aspects of their experience in new visual or literary experiments that would become the foundation of modernism.

For next class – summary of the 1 required thing to do:

Remember / FYI: The powerpoints are on Blackboard.

Footnote in my Picasso analysis:

For further analysis of this Picasso artwork and information on the artist, use this link: https://www.nga.gov/collection/artist-info.1783.html