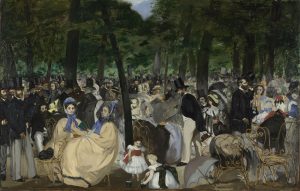 Self-review your own essay notes compared to my notes (Word) for the two essays about modernity. Think about any changes to your note-taking strategies to become an effective, targeted and concise note-taker.

This week, we will begin looking at modern art.

In the second section of the essay ‘What is Modern Art’ that you read last week, in the paragraph called ‘A Modern Art,’ two important and related directions that modern art will take are discussed. The text states that rather than continue to make artworks commissioned by others depicting religious or mythological scenes intended to instruct viewers, artists began to make artworks that reflected the things happening around them and art that reflected their subjective or personal ideas, feelings and beliefs. This is an important idea in the development of modern art.

First, we will look at two artists who reflect the beginning of these modern individual tendencies: Édouard Manet, who is considered the founder of modern art and whose work inspired the Impressionists; and James McNeil Whistler, an American painter working in London in the developing Impressionist style. (At the very bottom of this week’s instructions and texts, I have included optional or additional suggested resources about Manet and Whistler if you want more information about these two artists.)

After these short summaries of Manet and Whistler, you will read about the first modern group of artists, the Impressionists.

In art before the modern era, tradition was valued more than individuality and having your work exhibited in the official, government-sanctioned Salon exhibitions in France was necessary to have a successful career. It was necessary to adhere to visual naturalism with the surface of the canvas meant to appear as a convincing window onto the recognizable world. Before the modern era, art was generally in the service of the wealthy, the government or the church and the visual arts was part of high culture until the nineteenth century when mass media, popular culture and urbanism became forces of unprecedented historical and cultural change.

Modern art began with Édouard Manet, a lifelong resident of Paris, whose work depicted the colorful intersections of urban life, social interactions and popular entertainment. Manet developed a new style of Realist painting that challenged traditional expectations and proposed new ideas about art and society. Rather than treat the canvas as an illusionistic extension of space reliant on the accurate use of three-dimensional perspective and the careful blending and shading of tones to create volumetric forms, Manet acknowledged the inherent artifice or abstraction of painting. He deliberately ignored conventional elements like accurate linear perspective and chiaroscuro blending and modeling of his forms favoring images that luxuriated in the anecdotal contemporaneity of his subject matter.

In Music in the Tuileries, 1862 (seen above as this week’s opening image), he depicts an outdoor concert using the clothing of the audience and the umbrella in the foreground to accentuate the flatness in his treatment of forms while further blocking any spatial recession into depth with the thick foliage of trees in the background. Manet applied loose strokes of pure, unblended color in brushwork that is free and loose, barely defining some of the forms and eliminating details to better convey the idea of a spontaneous glimpse of the assembled crowd.

Manet includes himself on the far left side of the painting where he is half in and half out of the composition holding his walking stick as though it is a paintbrush to reinforce the arbitrary and fragmentary nature of both painting and perception in the urban environment. In profile against the tree on the left, Manet includes his close friend, the writer and poet Charles Baudelaire, whose influential essay “The Painter of Modern Life” (PDF) would be published one year later in 1863 urging his contemporaries to monumentalize aspects of daily life in their work.

A group of artists who became known as the Impressionists used Manet’s example to liberate themselves from traditional techniques and subject matter. They were inspired by the exciting and ever changing dynamics of Paris, then undergoing a vast program of modernization and urban renewal that introduced new railroad stations, electric street lighting and the city’s broad elegant boulevards lined with apartment buildings. The group’s name was originally taken from Claude Monet’s painting Impression: Sunrise, 1862, by critics of the group in response to the painting’s sketch-like appearance featuring loose and rough, layered brushstrokes of pure color.

At the time, advancements in industrial manufacturing made oil paints available in small portable tubes freeing artists from tasks like grinding pigment within the confines of their studio and enabling them to work outdoors directly in front of their sources of inspiration. To convey the nuances in color and light of their ever-changing surroundings with optical accuracy, rather than technical precision, the Impressionists used new techniques, including unblended and roughly layered brushstrokes of pure color and compositional arrangements, including unusual angles, asymmetrical compositions, and arbitrary cropping, to capture their fleeting perceptions with a sense of spontaneity and immediacy.

In one of his final and most famous paintings, Manet depicts a weary barmaid with a far-away look in her eyes in A Bar at the Folies-Bergère, 1882. (This painting was used as the first illustration in the ‘Becoming Modern’ essay.) This was one of the city’s most opulent and famous music-halls with the composition depicting the mirror lined space of the club’s U-shaped second floor. Manet challenges the viewer to relinquish the premise that a canvas must accurately reflect real space by denying the proper functioning of the mirror. Instead, he concentrates on details that convey the liveliness of the setting, including the dangling legs of a trapeze acrobat in the upper left corner, and he uses his female subject to comment on issues of social class, work, leisure and the culture of commodification. The barmaid is on display for male customers and subjected to their advances, as seen in the mirror, while her mind is clearly elsewhere with her daydreams providing her an escape from the tedium of her job that parallels the escapism in the lavish spectacle for those in the club’s audience.

In Music in the Tuileries, 1862, Manet appears to deliberately ignore chiaroscuro blending and shading in the umbrella and in areas of the clothing in the foreground, especially the women’s dresses and the pants on the man behind the umbrella, creating flat, to-dimensional forms defined by outline or the colors surrounding them. In A Bar at the Folies-Bergère, 1882, he denies the correct spatial proportions of linear perspective by compressing the barmaid, her reflected appearance, and the man talking with her reflection within one shallow middle-ground that doesn’t add up accurately within the spaces behind and in front of the bar.

In Olympia, 1863, and Luncheon on the Grass, 1863, Manet makes his avant-garde treatment of his forms even more challenging for viewers to understand by basing each painting on a well-known Renaissance artwork, so the individuality and modernity of his technique and treatment of the subjects becomes impossible to miss. (The week #2 powerpoint includes Manet’s paintings together with their Renaissance sources.)

Using any of Manet’s paintings from the early 1860s on this week’s powerpoint, find areas and examples where he seems to deliberately not use, ignore, or deny the accurate functioning of one of these 4 conventions of painting: chiaroscuro, foreshortening, linear perspective and atmospheric perspective. In your own words, explain what has Manet done in defiance of the conventional technique and what is the result of this in the appearance of his artwork?

Whistler was an American artist who lived in London, England, and worked in the Impressionist style of painting. When one of Whistler’s paintings, called Nocturne in Black and Gold: The Falling Rocket, an oil on panel painting depicting a fireworks display over the river Thames, made ca. 1875, was criticized by John Ruskin, a prominent art critic, Whistler felt compelled to sue Ruskin for libel in court to defend his work from Ruskin’s attacks against him.

The court case and ensuing debate that resulted from their disagreements illuminates the differing ideas about the role of art that existed at the beginning of the modern era.

Read two short summaries of this debate (their contents are very similar):

IN YOUR NOTES: After reading the two summaries and looking at the Whistler artworks on the week #2 powerpoint on the class Blackboard site, do the following with this content:

Impressionism is the first modern art style in painting. The Impressionists we will be studying were based in Paris, France, beginning in the 1860s to the 1880s. The Impressionists were inspired by the forces of modernity and the effects of urban and industrial change to paint aspects of modern life that were exciting and new with a freshness and quickness that mimicked the pace of urban life. Taking their lead from Manet rather than adhering to traditional expectations, they developed new techniques that suited their goal of capturing glimpses of modern life. Because many of them worked outdoors, directly in front of their subjects, they favored small canvases, sketchy forms, loose brushwork and saturated colors that reflected the actual conditions in which a work was made preserving a visual sense of movement and the spontaneity of direct observation.

Take notes as you read and watch videos for the following links. Notes should include only the most significant information, key words and ideas. Gather information about two things:

When looking at the artworks, remember the ‘Becoming Modern’ essay, which discussed urban life, capitalism, transportation, leisure and technology as introducing elements of life that were major features of modernity. See what forces of modernity mentioned in these essays appear as elements or subjects within these paintings.

When looking at the artworks, identify the formal characteristics that make the work look modern and Impressionistic and that correspond to the goal of capturing glimpses of the modern city. Think about the types of brushwork, colors, lines and forms, and the overall compositions, including how balance is achieved (usually asymmetrically) and the role and function of unusual perspectives and cropping. What do these things do to the appearance of the image? Think about vocabulary words and synonyms (similar words) for Impressionism.

Refer to artworks by the artist’s last name and the title of the artwork, not only by slide # for easy reference in class when we review this. Bring these notes to class for in-class review.

For next class – summary of the 2 required things to do:

The powerpoints are always on Blackboard. This week, the powerpoint of images is combined for Manet, Whistler and Impressionism and is very long because I have tried to show many example of each artists’ work. It is never advisable to print out these powerpoints. You will waste a tremendous amount of ink. Use them online.

To read more about Manet on the Met Museum’s website, use link: LINK: http://www.metmuseum.org/toah/hd/mane/hd_mane.htm (The Met has an incredible collection of Manet’s paintings on view.)

To read more about Whistler on the Met Museum’s website, use link: LINK: http://www.metmuseum.org/toah/hd/whis/hd_whis.htm

The Pre-Raphaelites were a group of British painters that the critic Ruskin endorsed and whose work he liked. To read about them, use this link: LINK: http://www.metmuseum.org/toah/hd/praf/hd_praf.htm

Ruskin was a champion of the artist Turner as well. Some of his artworks were in last week’s powerpoint. Why did Ruskin admire Turner, but despise Whistler? They both paint landscapes. Why were Turner’s acceptable to Ruskin? To read about Turner, use this link: http://www.metmuseum.org/toah/hd/trnr/hd_trnr.htm

Read the short essay about design reform in England in the 19th Century that was part of this ongoing debate. It touches upon some of the ideas that both Whistler and Ruskin were interested in. LINK: http://www.metmuseum.org/toah/hd/dsrf/hd_dsrf.htm