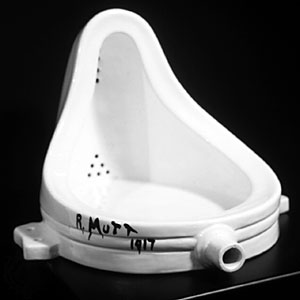 World War I begins in 1914, embroiling Europe in a cataclysmic conflict where the advancements of the modern industrial age are immediately shown to have devastating consequences. The war cuts short the innovations in modern art of the pre-war period with citizens from France, Belgium, Russia, Italy, England (and later America) fighting against the Germans and the Austrians (later joined by the Ottoman Empire).

The war lasts until 1918. Because of the technological advancements of the modern era, the war was one of the deadliest in human history, resulting in over 15 million dead and millions more grievously injured.

The Dada movement is formed in Zurich in 1914 as a protest against the war. In Berlin, Dada circles are soon established in reaction against the ongoing political instability and militarism that was responsible for the war, while New York Dada takes a more light-hearted approach using humor and irony to critique art and society. In all three places, Dada develops as against different things (or ‘anti’) including anti-aesthetic, anti-art, anti-reason, anti-logic, anti-authority, and anti-tradition as a means of forcing a critique upon commonly held ideas and values.

Keep notes that distinguish the major ideas, vocabulary words, and types of art, activities or characteristics as they relate to the types of Dada art in the different cities of Zurich, Berlin, and New York.

Continue keeping notes related to Dada in the three main cities of Zurich (this includes the beginning discussion about the Cabaret Voltaire and later about Jean Arp even though the website says Cologne); Berlin (this includes ‘The Spirit of Dada’ and about artist George Grosz); and New York (this includes the discussion of Marcel Duchamp) from this essay ‘Dadaism – Art and Anti-Art’:

Write out short answers to these questions in your notes:

In the Dada section on Khan Academy, listen to videos about artist Marcel Duchamp, who is the leading artist associated with New York Dada:

The artwork In Advance of a Broken Arm is actually what? The title adds ironic humor that completes the piece.

What does Fountain say about art as a concept in general and about the role of the artist? (Add this information to your answer above about this artwork.)

WRITING ASSIGNMENT for NEXT CLASS:

Review all of your notes for the central information and for what appears to be most important for the ideas and goals of the Dadaists, either in Zurich, Berlin, New York, or all three groups.

Write a ‘job posting’ or help wanted’ advertisement from the point of view of the Dadaists calling for other people to join them, either in general or in one of the three cities. Think about what the Dadaists valued and what they endorsed. Your ‘job posting’ advertisement should include the best possible choices of words and terms to communicate about them and their ideas and about what they would be looking for in other people who would join them.

This is a chance to have a little fun. If you want to include images, collages, or hand-draw the ad, that is great. Think about how every word and every image should express the ideas of the group in coherent visual form and feature the visual characteristics seen in their artworks.

We will review these Job Postings or Help Wanted ads in our next class to discuss how and what makes each of them successful in terms of the goals and ideas associated with the Dadaists. 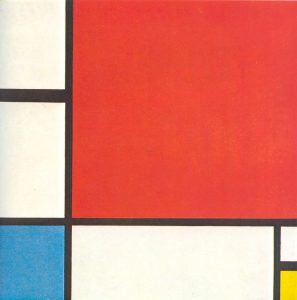 Piet Mondrian, Composition with Red, Blue, and Yellow, 1930, oil on canvas. This is an example of De Stijl.

In the European country, Holland (also called the Netherlands or the Dutch Republic), geometric abstraction in a style called De Stijl is developed as something utopian, universal and harmonious after the divisive effects of nationalism during World War I. De Stijl’s leading artist is Piet Mondrian.

Read the essay about De Stijl (when you get to ‘concepts and styles’ click on the downward arrow to reveal the rest of the essay – read all of it!):

On Khan Academy, in the same section, listen to two videos about Mondrian’s artworks:

Here are works similar to the ones discussed in the videos made as Mondrian is developing as an artist: 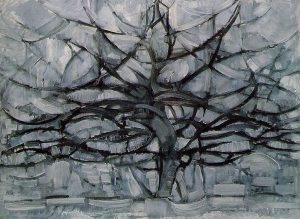 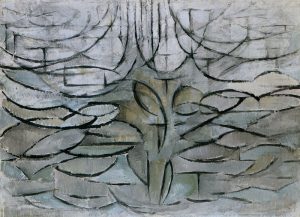 The artwork at the top of this page is in Mondrian’s mature De Stijl style; Mondrian, Composition with Red, Blue, and Yellow, 1930, oil on canvas

Answer these questions in a few sentences in your notes (Question 2 and 3):

Explain what has happened to Mondrian’s treatment of the imagery of the tree to arrive at this De Stijl artwork. What happens to subject matter? What specific elements of composition does he restrict himself to using in De Stijl? List three elements.

How is Mondrian’s mature artwork Composition with Red, Blue, and Yellow and De Stijl in general considered a universal style or a harmonious style? Explain what this means.

For class next week – summary of the 2 required things to do: